“Luck is when opportunity meets preparation.”

Many great opportunities, if you manage to seize them, will look like luck to an outsider. But the open mind and preparation that are needed in order to grab the opportunity are rarely acknowledged by anyone except you.

So how do you prepare to get lucky? In a world that is always in flux, it is very difficult to plan ahead and cover all your bases. Instead, focus on putting yourself at intersections of people and ideas, making your thinking flexible and having a clear sense of the general direction you want to go in.

The first step determines your ‘opportunity flow’. The second let’s you recognize opportunities when they appear. The third step helps you to separate relevant opportunities from everything else, the signal from all the noise.

The proverb “If you’re the smartest person in the room, get out of the room” is one of my all time favourites. And I like to extend ‘smart’ to mean ‘talented’, ‘skilled’, ‘experienced’ and ‘insightful’ as well. Because you can learn so much more from people who are better than you at something, than trying to bang your head against the wall by yourself, or with others whose mastery has not yet reached your level.

That’s why I love to go to high caliber conferences like the Cartoon Masters events, and I try to surround myself with people who are smarter than me. You have to get out of your ‘room’, out of your own bubble to learn. Because isn’t that what life is about?

Fastcompany recently ran a series of very interesting pieces about how Buzzfeed has gone about their plan for world domination. While Buzzfeed’s publisher Dao Nguyen says that you can’t make decisions on data alone, the company clearly has its main focus on mining proprietary engagement data and improving its processes in a never ending loop.

I see Vice on the opposite end of the spectrum. While they are no strangers to utilizing data to inform their work, Vice content at least feels to me like it has a distinct voice – unlike Buzzfeed content, where the headlines just scream of clickbait.

In this Gigaom article Mathew Ingram argues that this is exactly what is happening to the media industry: The value is moving to the edges, either to those with the tech and data advantage or those with brand awareness and an original voice.

Which end are you going for?

This is the last post in my series of 6 predictions for 2016: 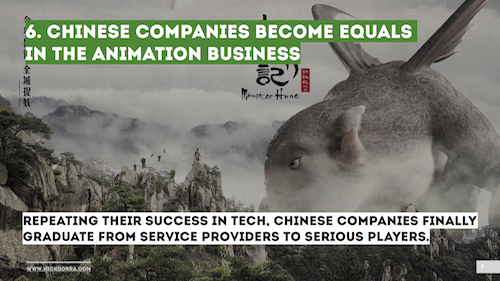 The first months of 2016 have been filled with news about the box office performance of foreign and local films in the Chinese market. Experts are assuming that the Chinese box office total will overtake the US total next year. Fueled by more disposable income from a growing middle-class, companies such as Wanda are building more and more cinema screens across the country.

But as the local feature film market remains heavily regulated, the more interesting development from an indie animation producer’s view is how Chinese animation companies are growing up. Exactly as things evolved first in manufacturing and then in digital technology, Chinese companies are graduating from cheap labour service providers to proper partners.

When you look at the stories of tech giants Tencent and Alibaba, it doesn’t take a lot of imagination to see what rich resources coupled with determination and sound long-term planning can do for the Chinese animation industry. THR aptly asks “Will this be China’s big year to buy into Hollywood?“

After taking a timeout for Kidscreen last week, here’s my 5th prediction for 2016: 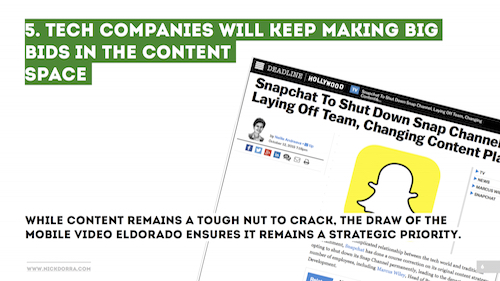 The relationship between content creators and tech companies leveraging that content can be a tricky one. Both industries hold half of the solution to the puzzle, and they have to figure out how to best work together. Content is king, but discoverability is the key to the kingdom. If you can’t unlock it, no-one’s going to see it – but it doesn’t matter how many keys you got if they lead you to a boring king (ok, I might have beaten that horse to death now…).

Many companies will make big bets on proprietary technology or content production teams this year, and the rewards looming at the end of the rainbow are so huge, that no big player can afford to ‘reserve the right to play’ anymore. Creative approaches that utilize the native features of a tech platform, like the ‘Shield 5‘ story unfolding right now on Instagram, are a great seeding ground for bigger initiatives – don’t be surprised when Instagram recruits Anthony Wilcox to head a newly founded native content unit. 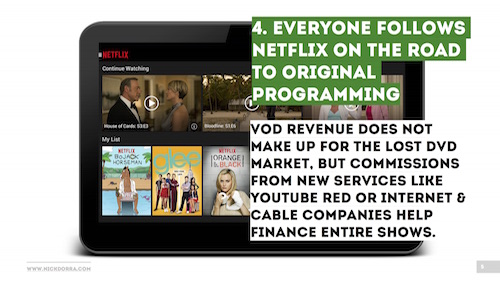 Every subscription service needs content, so that it can differenciate itself. Because why would people add your service to their monthly credit card bill, if they get the same content from a competitor? Netflix has of course been the posterchild for this kind of trend, as noted by Jason Hirschhorn yesterday:

Amazing to look at @netflix‘s homepage just a few years into originals. The balance is shifting… pic.twitter.com/5yJq09240s

Back in 2013 at Rovio, we launched ToonsTV to much excitement. From the start our programming strategy was clear: Yes, we would bring in third party content, but given the placement of the video player inside our gaming apps, we’ll need to meet and exceed our audience’s expectations by giving them exciting Angry Birds content. And the strategy worked.

Youtube Red, Youtube’s paid subscription service, did not wait for long to unveil an original slate of projects, generated out of the huge talent pool that uses Google’s video platform for distribution and fan engagement. Here in Finland, telco Elisa has made forays into original content for their ‘Elisa Viihde’ OTT product, garnering a slew of TV award nominations. And now even Apple is rumoured to be entering the fray, cementing the fact that you cannot have a viable SVOD product without your own anchor content.

I see all of this as a remarkable development for animation producers world wide. The proliferation of financing options is great news for any content creator. As long as you remember to slice your rights the right way, and are able to negotiate your windows effectively, there’s a whole lot to gain from all the new entrants into the distribution game.

A very good example comes from Amazon. Their original series have been a strong contender alongside Netflix’s, both for audience appeal and awards. But their January announcement to build a slate of movies that they will distribute both threatrically as well as through Amazon Prime, coupled with attaching respected indiefilm player Ted Hope, sent cheers through the independent film community. It might turn out to be a real game changer for that part of the industry.

It is time for another post from my “6 predictions for 2016“. This time it’s all about the mobile gaming space: 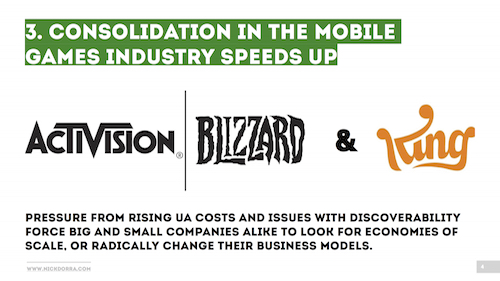 Last year saw a few higher and lower profile deals that are heralding a larger wave of consolidation in the industry. Just last week App Annie revealed data showing that the average ‘time to maturity’ for mobile games has dropped to a mere 17 weeks, which by itself would be reason enough for many companies to seek economies of scale. But there are several more factors driving the wave, and even big players like Activision have to consider lots of variables when choosing their acquisition targets.

The issues most relevant to animation producers are the rising user acquisition costs, and the underlying challenge of getting discovered in one of the app stores. When you’re competing for attention with Clash of Clans and Candy Crush Saga as an indie producer, you’re hopelessly outgunned. In my presentation at Cartoon Digital last month, I went into more detail about how tough the market has become for kids IP based mobile games.

One way companies are tackling the issue is by licensing strong existing brands or trying to build their own character based IP that extends beyond games. Rovio has been the poster child for taking a game and diversifying it into every conceivable medium – and not surprisingly they had their board chairman and main shareholder publicly express their interest in participating in the upcoming consolidation of the sector.

Continuing my series of posts on the “6 predictions for 2016“, here’s an elaboration on number two. 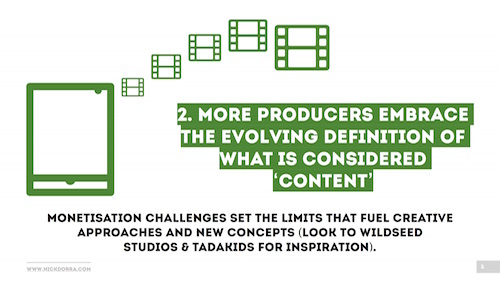 The point I want to make with this prediction, is that the definition of ‘content’ has already changed (especially for the younger audiences). Now it’s time for the older generation of producers to catch up. And while getting to know a new terrain can be hard or even daunting, it offers many learnings both about the business as well as our audiences.

One company who really embodies this change for me is TaDaKids. Founded by kids industry veterans who were brave enough to discard everything they thought they knew, rigorously re-educate themselves and launch a new venture to test their thesis. You can read more on their thoughts here.

Fully accepting how tough it is to make money on Youtube, TaDaKids’ founders reverse-engineered a business case. They went online for inspiration about what kinds of content is popular, coupled that with their decades of experience as content creators and made sure they found ways to keep the per minute costs to a sustainable level. The coming months will show if their hard work pays off.

As an interesting sidenote, I want to close with the following story. TuTiTu, who were one of the inspirations for TaDaKids, has a massive following on Youtube, and the company makes some nice revenue off the platform. When asked how they achieved their success, the answer was simple: by following the free Youtube playbook to the letter. It is quite amazing how many companies really under-use this available set of best practices.

In my previous post I started the year off with “6 predictions for 2016” from an animation producer’s point of view. Since headline style slides are very slim in content by nature, I decided to elaborate a bit on each prediction in weekly posts. Here’s the first one: 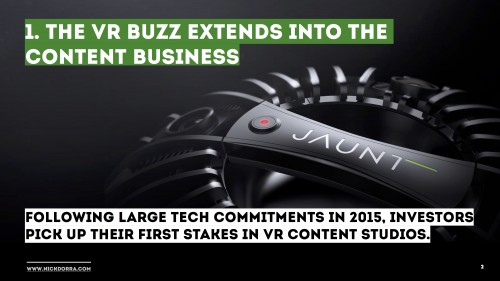 In the past 5 years, investors have poured 4 billion dollars into the nascent VR tech industry. 2015 alone saw almost one billion in investments made. However, up to now most of the money in the VR sector has gone into technology companies, whether they produce headsets, rumored contact lenses or an “end-to-end content creation platform“.

While some investments have been made in games and entertainment companies, the end products are not what you’d call narrative storytelling. Baobab is actually the first studio I’ve heard of, who are vocal about creating narrative film experiences for VR devices.

What does this mean for an animation producer? Personally, I’ll be following the world of VR closely, and keeping an eye out on Baobab and other similar studios. Doing tests and pilot projects with the new medium is certainly worth some R&D resrouces, and offering 360 skills might even land your studio an assignment from a client who wants to be perceived to be on the cutting edge.

360 video can achieve a lot of audience love, but there is a big questionmark as to whether VR actually lends itself to narrative stories at all. I very much agree with Ed Catmull’s analogy, that “books aren’t the same thing as movies. They don’t have to be.” And similarly, we will definitely find use cases that let VR shine – but we’ll have to wait and see whether those are narrative stories.

I figured it would be a fun thought exercise to create a deck with 6 predictions for the new year. They’re all written from an animation producer’s point of view, and tie into my presentation at Cartoon Digital in Luxembourg in December last year.

6 predictions for 2016 from Nick Dorra

I’ve gone into more detail on each prediction in separate posts: